The Ultimate Guide to Opal Gemstones

Opal gemstones are beautiful stones that come in many different colors. They contain silica and water, which causes the stone to change color when subjected to light. Opals can be found all over the world, but they are most often mined in Australia.. Let’s talk about how opal gemstones form, their various colors, where they can be found worldwide, and how you can buy your very own opal jewelry!

Opals come in many different colors: blue, pink , green, orange, red. In the light, opals can reflect many colors, making them a popular stone for all types of jewelry.

These colorful stones are often found with other types of rocks or minerals embedded inside them as well. Opals are usually cut into either domed cabochons for jewelry purposes or flat-backed discs on display cases. On the Moh’s scale of hardness Opal falls between a 5 to 6.5, meaning they are very soft and delicate. That is why these need extra attention and love for your jewelry, such as rings, so they do not become marred or damaged.

Our Opal Jewelry is made of a AAA Grade in gold or has been lab synthesized to perfection for our titanium pieces. 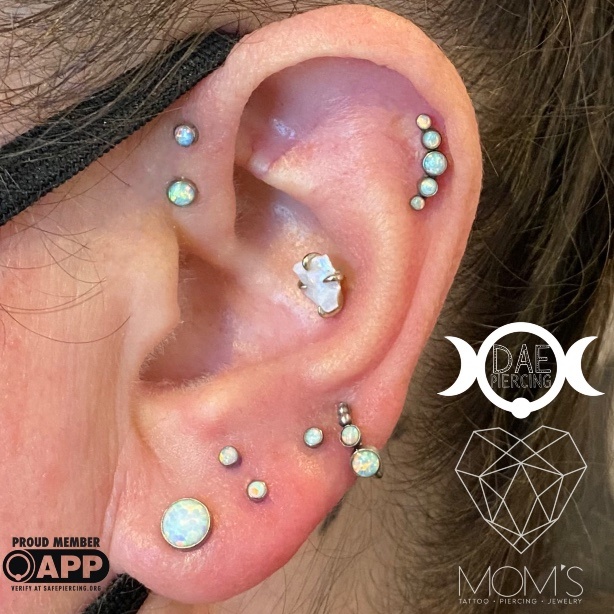 Since opal has this unique property where the color changes depending on the angle you look at it from (it's called "opalescence"), people have started referring to these properties as being "opalized." Some opals will even have black and white spots throughout them, called "black opal."

Opals are often mined in Australia, but they can be found all over the world. Some of these places include Brazil. However, these stones do come with a significant price tag due to their rarity and demand as jewelry pieces.

Opal is one of the most common types of gemstones used today! They have been around for centuries. It is believed that there are opal metaphysical properties.

People believe that ancient civilizations started mining opals because of an earthquake that was caused by a lightning strike hitting a water-bearing rock formation near Coober Pedy, South Australia, back in 1915. Many people think that this event sparked interest in how opal forms within volcanic rocks.

The Types of Opal

There are two main types of opal gemstones: common or potch and fire.

Most people consider them the same thing, but there is a significant difference between the two even though they look very similar when found in nature. Common opals are usually opaque with lots of white spots throughout them.

They also have more play-of-color than fire opal does, which means their colors can change under different light conditions. On the other hand, Fire-Opal has much less water within its structure, so it's not as translucent.

This stone is especially great for opal body jewelry.

This type of opal is usually opaque, with a lot of white spots throughout it. It has more play-of-color than fire opals do, which means their colors can change under different lighting conditions.

They also have a noticeable body color, but not as much of the rainbow shimmering from inside like some other types of gems might.

White opalsare made up of mostly water, but they also contain some organic material as well. These stones don't necessarily have the most play-of-color like other colors might.

People love them due to their popularity, universality, high transparency, and brightness when exposed to light. 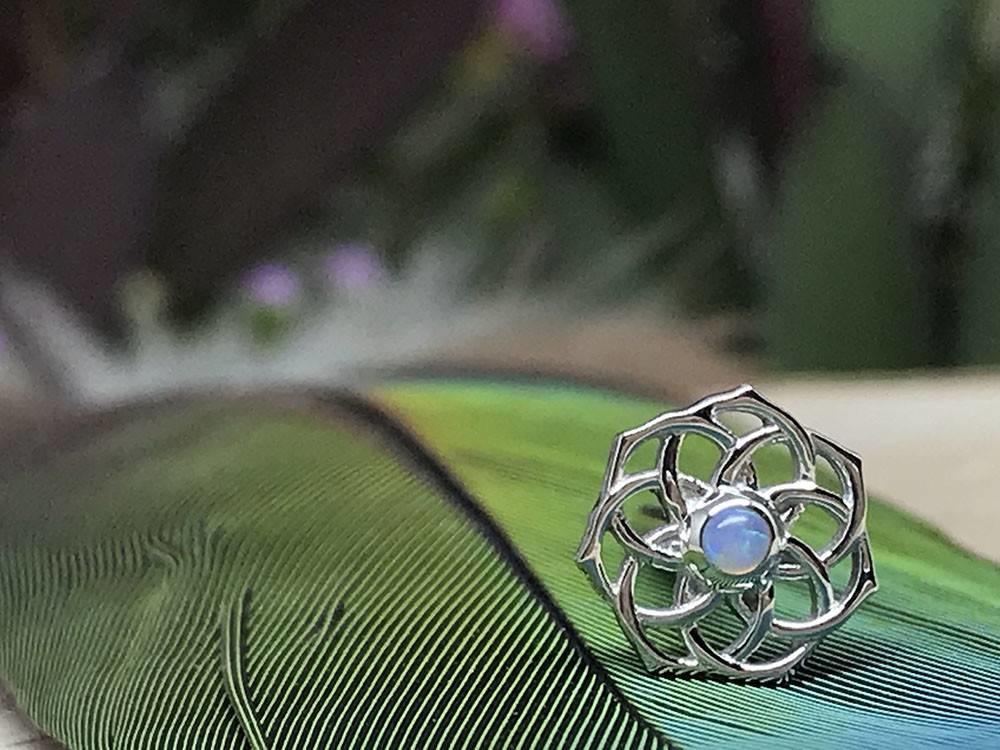 The Different Colors of Opal

Opal gemstones come in various colors, but they are most often found in blue and green. There is also a rare type of opal that features both black and white spots throughout it called "black opal." 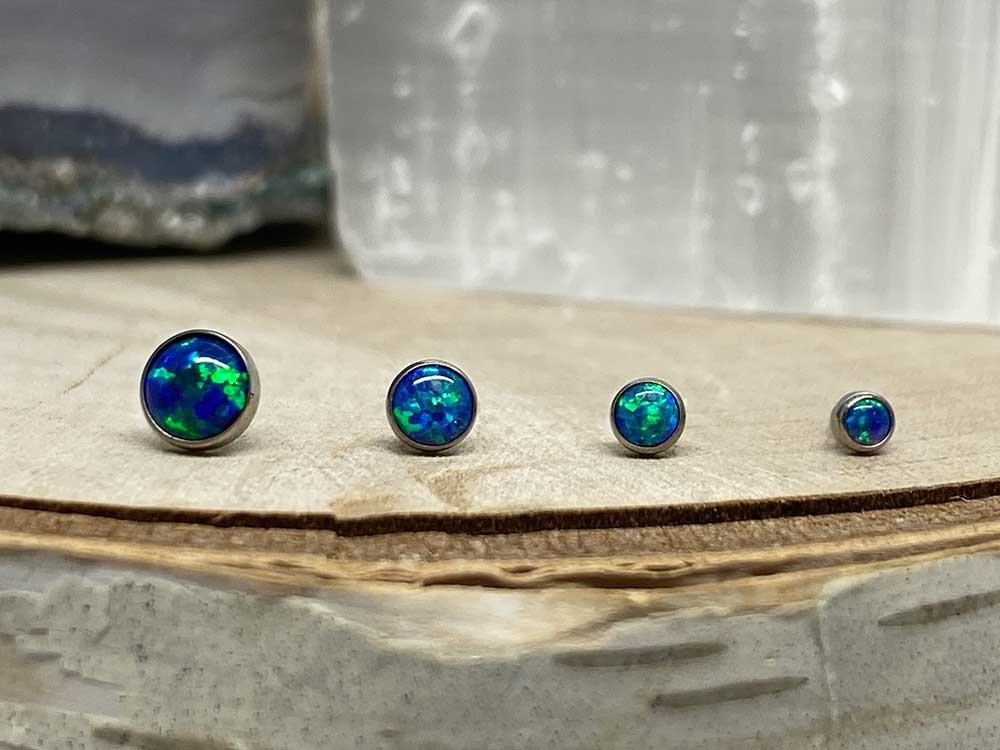 Blue or colored opals contain organic molecules such as hydrated silicates, iron hydroxides, and phosphate. These stones can come in various shades such as light blue, deep blue, greenish-blue, or even yellowish-green.

Black opals are very rare gemstones that contain both white and black spots throughout the stone.

They usually have lots of red and those other colors, which is why people refer to them as "fire". This is because they seem like flames shooting through the center of this stone. 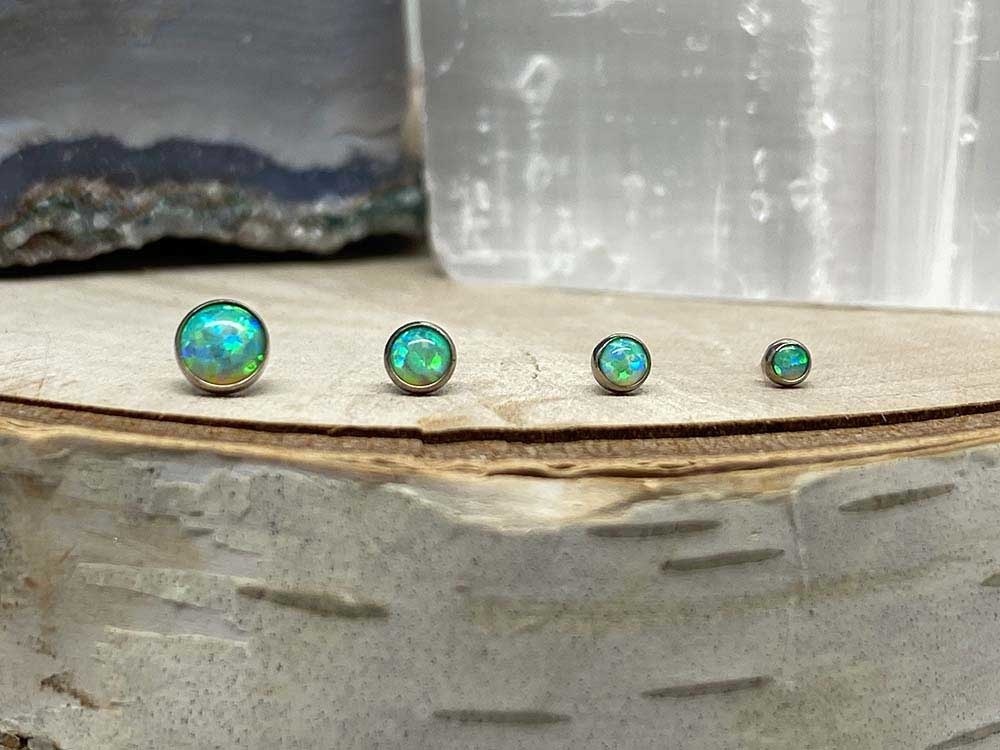 Green opals are one of the most popular types since it's so easy on the eyes to look at these beautiful gems! It has more water than common opal does, though.

This is why it's so translucent. It allows you to see all those beautiful rainbows shimmering within this stone.

These stones are transparent, and they contain iron oxide within them rather than water. This causes these gemstones to only display one specific color instead of having all those beautiful rainbows showering through them when exposed to light.

Fire opals also don't fade out quickly either since there isn't any water content in this stone. These stones come in many different colors, but people usually see them as red, their natural color.

Black or "potch" opals usually refer to transparent common opals that have a lot of white spots throughout them. These stones are usually very opaque and don't contain any play-of-color, which is why people call them common opal. 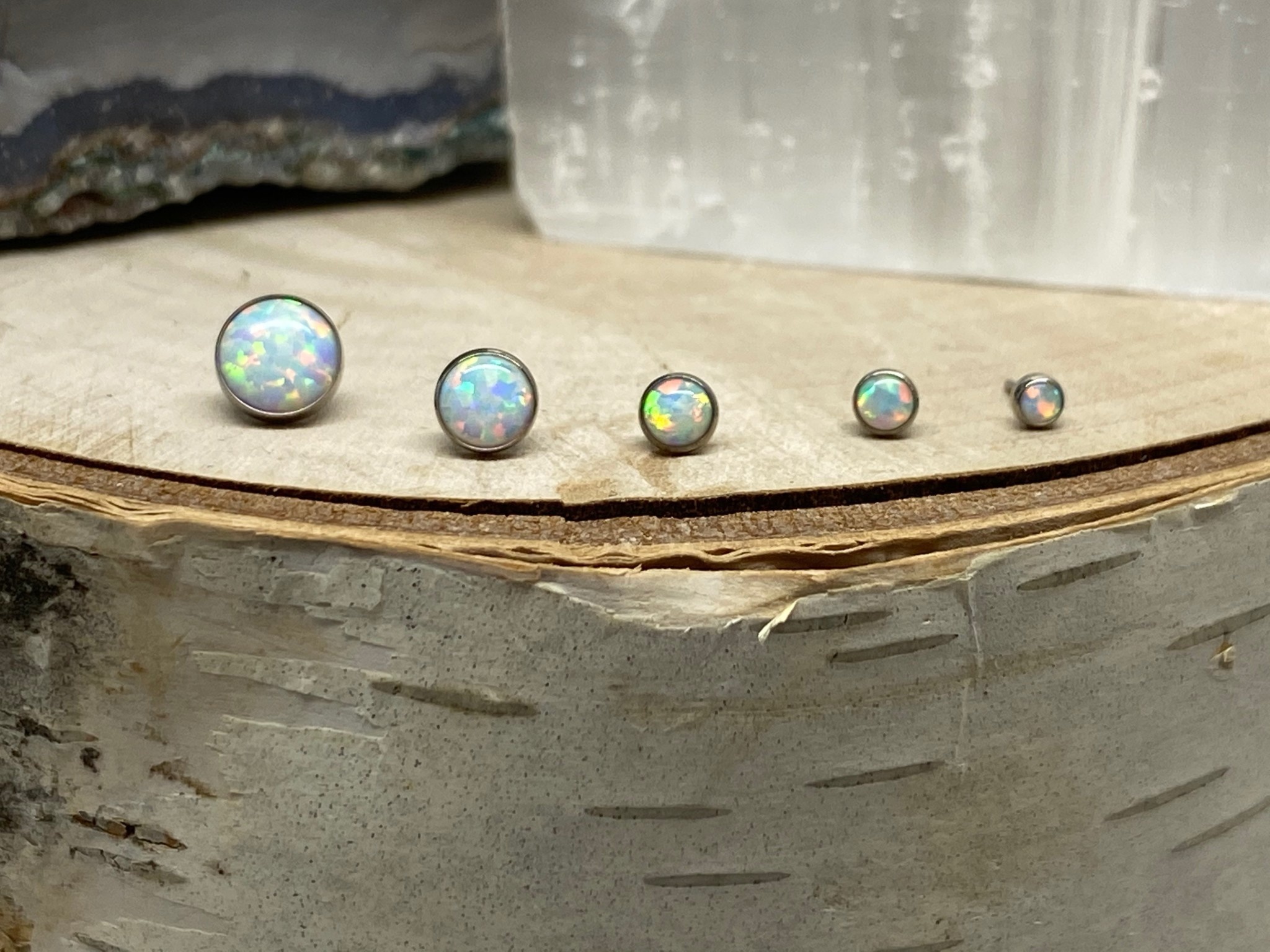 White or "potch" opals refer to transparent gems with no play-of-color, but these stones do contain some organic material within the structure. They also might have lots of tiny little dots throughout this gemstone, making it look like milk swirled into an ocean puddle!

Some other names for white potch would be seed opal since there are so many specks in these stones. This type isn't as popular because people love all those colorful rainbows shimmering from inside a colored opal.

Colorless or "white" opals are transparent with no play-of-color. They're also mostly water. They aren't very common since most people love all those rainbows shimmering.

Sometimes white potch is referred to as this type too. However, they still contain organic structure, so don't be fooled by the name! Even though these gems might not have many colors, they make beautiful display pieces due to their transparency.

What Do the Colors Indicate?

Opals come in many different colors depending on where you find them around the world! Some stand out more than others do due to the sheer amount of color that they have due to the presence or lack thereof of water.

The more hydrated opals are, the more vivid their colors will be. Even though all opal gems show some play-of-color when light is passed through them, it typically only fires opals that display bright reds and yellows under blacklight.

Furthermore, impurities like vanadium, chromium, and iron oxide will usually affect the opal color. Without these minerals present within the stone itself, you won't get any color at all.

What Is the Difference Between Precious and Boulder Opal?

People usually get confused between these two types since they come from Australia and display play-of-color/opalescence under light exposure.

However, they're pretty different on a fundamental level. Boulder opal is usually found in the rough and still needs to be cut down into a finished stone which takes away some interior color.

This type of opal may sometimes contain many impurities, which means it will display even more colors than just fire!

Precious opals are also found in this region, but they're most frequently pulled from alluvial deposits deep underground, where there's plenty of water present within the structure itself.

Since precious gems are already shaped perfectly, you don't have to worry about losing any color during cutting either since these stones only need polishing before being placed onto jewelry or other types of accessories.

It's also easier for jewelers to find wholesale deals since many suppliers in this region can provide lots of precious opal stones for cheap.

What Do the Numbers Mean?

Many people might ask themselves why certain types of opals have numbers associated with them since it doesn't necessarily indicate anything about the stone itself.

However, these digits do mean something, and the mining industry commonly uses them to categorize different colors or "play-of-color" within each type.

Since all fire opals display bright reds under blacklight, other gems like a boulder and white potch aren't considered valid forms of play-of-color, so their classifications are labeled differently than what you would expect from an actual color change the opal birthstone.

However, as far as we know, each organization has its own classifications. This can be problematic as there isn't a globally recognized classification for opal. This is why it's easy for scammers to sell poor-quality opal or even fake opal.

Opal gemstones are the most diverse on earth, with many colors and unique features.

They're also quite popular all around the globe due to their colorful appearance. Due to the popularity and scarcity of this stone, these stones may require a more significant investment depending on the size.

Nonetheless, there's an option for everybody. If you're interested in purchasing high-quality opal in your body jewelry, get in touch with us and we will help you choose.

You can always see what’s in our Opal stock and everything else we have too on momsjewelry.com!